You are here: Home / About the Museum / Why is the Mike Evans Israel Museum in Jerusalem? 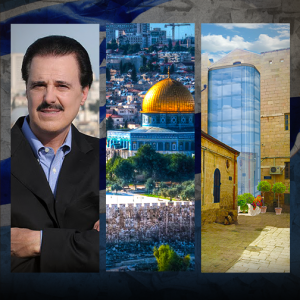 This, then, is the second facet of the answer. Please continue to follow this series of articles from beginning to end. Somewhere along the journey you may find the answer for yourself, even before we finish.

When the LORD God, Yahweh, told Abraham that, “I will bless them that bless thee, and curse him that curses thee,” He did not place any restrictions on whom He would bless – or on whom He would curse. He did not limit His blessing to any nation or tribe or even any family or individual. Nor did He exclude anyone from either being blessed or being accursed.

Solomon said that the fear of the LORD is the beginning of wisdom, but that fools despise wisdom and instruction. Here, as throughout the entirety of Scripture, the LORD maintains a clear distinction between foolishness and wisdom. If we truly believe, as we explained in the first facet of our answer to “Why does Mike Evans have a museum in Jerusalem?” that God is who He says He is, then we must believe that what He says, indeed, that everything He says, is true.

Therefore, we are compelled to believe that His promise to Abraham must be true. Our response to His truth is always what separates the wise from the foolish. We affirm here, and by the establishing of the Mike Evans Israel Museum in Jerusalem, officially known as the Friends of Zion Heritage Center, that it is our desire to bless the Jewish people and to promote a love for them among the nations.

One of our hopes, although not a stated objective as such, is also that the Jewish people will more fully see how the LORD divides between those who bless and those who curse Israel. The work of Yad Vashem has done much to recognize the Righteous among the Nations. We see this as one of the many ways that Yahweh has used to bless those who have blessed His people.

Our goal is simple. The museum is not for gain or reward. The museum is here to bless the children of Abraham. Perhaps, in doing so, all who visit will see evidence of how God has blessed those who have blessed Israel throughout modern history. To do that, we have many obstacles to overcome, not the least of which is all of the crimes that have been done to the Jewish people throughout the Diaspora in the name of Christianity. Whether those crimes were perpetrated in the name of a nation, in the name of a church, in the name of an organization or by individuals, they could never have been done by anyone who has read and believed what God has written.

This is also why the Friends of Zion Heritage Center (Mike Evans Israel Museum) exists. The lives and deeds of persons recognized in the Center are further evidence that, regardless of the headlines of the past or those of today, there are true Christian men and women who, as an inseparable part of their faith, wish to bless Israel. Our hearts are grieved that, even today, there are so-called Christian churches and denominations who oppose Israel.

So we are here to remind you that the dividing line that God has established is clear and simple. It is not about nations, ethnicity, politics, or religions. It is about who blesses Israel and who curses her. We choose to follow God and His wisdom and to bless the Jewish people and the nation of Israel. Anyone who would choose to curse Israel and the Jewish people is, by God’s standard, a fool.

That is the second facet of the answer to the question. It should be perfectly clear. We believe that God will bless those who bless Israel.