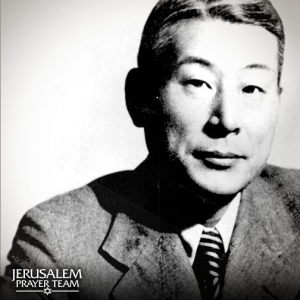 His acts of human kindness that emanated from a strong moral compass were virtually unknown to the world at large for nearly 30 years. It was in 1968 that Joshua Nishri, one of the 6,000 “Sugihara Survivors” was able to locate Chinue Sempo Sugihara in Japan. It was only then that Sugihara became aware of the scope of the impact that had been achieved as a result of his actions, the actions of a man with a kind and humble heart who was determined always to do right. Because of his righteous acts, he is counted today as a Hero of Japan and as Righteous among the Nations.

It was only after his death in 1986 that his own country became aware of his heroic efforts; efforts that the government of Japan did not appreciate at the time they were taken.

Sugihara entered the service of the Japanese diplomatic corps in 1919. In 1939, just one year after being posted at Helsinki, Finland, he was reassigned to open a consulate in Lithuania. He was almost immediately confronted with a crisis. Hitler’s 1939 invasion of Poland displaced a massive wave of Jewish families seeking a safe haven in the only direction available to them – to the east. To the east meant travelling through Russia, but Russia would not allow the Jews to travel across the country without a valid transit visa.

In July 1940 Sugihara awoke one morning to the sounds of a crowd of several hundred Jews outside the consulate, pleading to secure Japanese transit visas.

Three times Sugihara appealed to the Japanese government to secure authorization to issue the necessary visas. His request was denied each time.

Realizing that the volume of visas required would be great and, most likely expecting to be denied permission to issue them, Sugihara began issuing them without authorization. He managed to hand write and stamp some 300 visas per day, a task that would not allow him to take breaks for meals and that left his hands painfully stiff at the end of the day. He continued this practice through the end of August, when he was ordered to leave his post.

Realizing the desperate need for the Jewish people to escape Hitler’s onslaught, he continued writing visas in the car on the way to the train station and on the platform while waiting for the train. Even after boarding the train, he wrote more visas, tossing them out of the window until the train began to depart. Then, as the train was leaving, he tossed the stamp that made the visas official into the crowd so the Jewish people could actually authenticate their own visas.

Following the war, Sugihara and his family were imprisoned by the Russians in an internment camp in Rumania. When released, he returned home to find that he had been dismissed by the Japanese Foreign Ministry. His ignominy forced him into a life of abject poverty, although he eventually worked his way out of it by taking a job in Moscow that allowed him to see his family in Japan only twice a year. Because he saw no reason to glory in what he had done, he became just another obscure person. Yet, the last words he heard from the Jews on the railway platform in Lithuania rang in his ears: “We will never forget you!”

They remained true to their word. He had not realized that he had helped 6,000 Jews to escape. Nor did he realize that those people never forgot him. After years of searching, Nishri was able to locate him, sharing with him the news of the numbers he had saved. Sugihara visited Israel in for the first time in 1969. He was greeted by the Israeli Minister of Religion, Zerach Warheftig, another of the Sugihara Survivors.

Sugihara was honored as Righteous Among the Nations in 1985, one year before his death. Even with this great honor, his story remained unknown in Japan – until his funeral was attended by an unusually large delegation of Jews from around the world. This simple, humble, honorable man would probably be embarrassed to know that today there are monuments erected in his honor in Kaunus, Lithuania, the location of his consulate, and in Yaotsu, Japan, the town where he was born.

He was just a man who wanted to do the right thing. His commitment to righteousness was ordinary to him, but heroic in the eyes of the Jewish people and the world.