You are here: Home / About the Museum / The Ten Boom Family 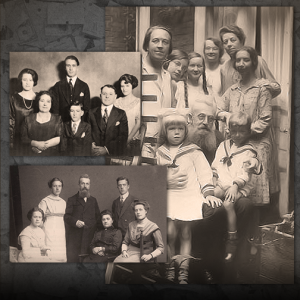 “It would be an honor to give my life for God’s ancient people.” ~ Casper Ten Boom

Casper ten Boom was a man of deep and precious faith in God. He raised his family in the Calvinist tradition of the Dutch Reformed church. He made his living as a jeweler and watchmaker in Haarlem, the Netherlands. But it was not what happened in his shop that defined his life, so much as it was his dedication to the LORD and his commitment to raise a godly family. Although he was surely proud to carry on the business he inherited from his father, it was far more important to him that he carried on the weekly prayer meeting that his father began in 1844.

One must work to support a family, but the desire to continue a prayer meeting must come from something else deep within. The reason for the ten Boom prayer meeting was specifically to pray for the Jewish people and the peace of Jerusalem, a directive from Scripture (Psalm 122:6) that all true Christians willingly follow.

It was that commitment to Scripture, to God and to the Jews that started the prayer meetings, and it was that same commitment that resulted in its temporary end in 1944.

When the Nazis invaded Holland, the ten Boom family’s love for the Jewish people compelled them to work with the Dutch underground to hide and rescue as many Jews as possible from the clutches of persecution and death. Casper built a hiding place behind a fake wall in his daughter Corrie’s bedroom in the small family home about his shop. That tiny space could hold up to six people at a time, but they had to remain standing and absolutely quiet in the event that the Nazis searched the ten Boom home, which, in fact they did from time to time.

The Nazi’s suspicion that the ten Booms were assisting Jews to be moved to safety was confirmed by a Dutch informant. The Nazis managed to arrest a total of 35 people, including the ten Booms, on February 28, 1944. However, despite their best efforts, they missed the six Jews who were in the hiding place behind the wall. The ten Boom family was split up and sent to different prisons and concentration camps. That is the only reason the organized prayer meetings stopped. Casper, who had said that “It would be an honor to give my life for God’s ancient people,” died at the age of 84, only 10 days following his imprisonment. Three other members of Casper ten Boom’s family died, either in prison or as a result of being imprisoned. His daughter, Corrie, survived and lived until her 91st birthday in April of 1983.

Through their efforts, it is estimated that the ten Boom family helped to rescue some 800 Jews from the Nazi reign of terror, now known as the Holocaust. There is a tree in the Garden of Righteousness at the Holocaust Museum in Jerusalem, planted in 1968 by Corrie at the behest of the museum.

But, what of the prayer meetings that appeared to come to such a tragic end in 1944? The Corrie ten Boom Fellowship was established by Dr. Mike Evans as a ministry of the Jerusalem Prayer Team, as part of his and its commitment to continue praying for the Jews and for the peace of Jerusalem. Small groups no longer gather at the ten Boom residence every week, but rather, people all over the world pray daily for the requests shared through the online presence of the ten Boom Museum.

The faith that motivated the ten Booms to pray for the peace of Jerusalem still moves Christians to do the same today. The family’s legacy lives on as an example of how true Christians should, and do, love Israel and the Jewish people. We are pleased to be a part of preserving the story of the ten Boom family in the Mike Evans Museum and the Friends of Zion Heritage Center.