You are here: Home / Archives for Herminie Santrouschitz 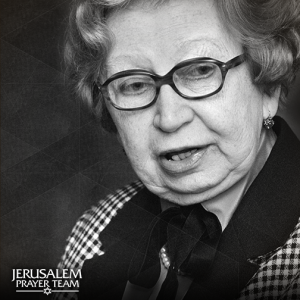 If not for the list of the Righteous among the Nations, the world might have long forgotten Miep Gies and her husband, Jan, and she might have passed away into obscurity when she died on January 11, 2010, a month shy of her 101st birthday. But, as is the case with so many more, we must keep her memory alive so that “never again” will the events she experienced recur.

On her 100th birthday she said, “I am one hundred years old now. That is an admirable age, and I have even reached it in fairly good health. So then, it’s fair to say ‘You’ve been fortunate,’ and being fortunate seems to be the red thread running through my life.”

At an earlier date she declared that she stood, “at the end of the long, long line of good Dutch people who did what I did or more – much more – during those dark and terrible times years ago. But, always, like yesterday in the hearts of those of us who bear witness, never a day goes by that I do not think of what happened then.”

Miep was Austrian by birth. At the age of eleven, Herminie Santrouschitz was taken-in temporarily by a family in the Netherlands as part of a program to help the Austrian people recover from the destruction of World War I. As it turned out, it was decided, the situation being what it was, that Herminie – or Miep, as she was called in Holland – should remain in the Dutch family’s care. That turned out to be both fortuitous and sufferable.

She was fortunate to meet her future husband, Jan Gies, at work before she was laid off and took another job at the Opetka Company in Amsterdam. She and Jan became good friends with the owner of the company and his family. Over a short period of time, things turned ugly again in Europe as the Nazi regime in Germany set out to conquer the world and annihilate the Jews. Miep was fortunate to be living in Amsterdam rather than in her homeland of Austria. It seemed like the Netherland’s neutrality would keep it safe from Hitler’s madness.

As it turned out, that was only an illusion. Germany stormed the Netherlands and began to implement Hitler’s Final Solution there, just as it had elsewhere. Some Jews fled the continent. Others, like Miep’s boss, hid. Miep and Jan brought food and other necessities to his family to provide for their sustenance whilst in hiding. She risked her life, using her lunch break to make her daily deliveries. She knew that, should they be found or she be caught, they would all be subject to the same fate. Unfortunately, the family was eventually found and sent to their miserable fate. Only the father was saved alive. As for Miep and Jan, no one was the wiser.

After the war, Miep said that, “I am not a hero. More than twenty thousand Dutch people helped to hide Jews and others in need of hiding during those years. I willingly did what I could to help. My husband did as well. It was not enough.” Any righteous person would do the same.

Her kindness extended beyond helping her boss’ family. After the family had been taken, she visited the place where they had been hiding to gather up their personal effects and deliver them to her boss, Otto Frank. Among those belongings were the diaries of Otto’s daughter, Anne, which would eventually tell a small part of the story of the persecution of the Jews during World War II. Little did Miep know, when she handed those diaries to her boss, how many lives would be changed by a simple act of kindness.

All Miep knew was that, “It was not enough.”